Students Demand a Stop to Trans Mountain for a Just Recovery

YOU ARE HERE:Home/Blog/Students Demand a Stop to Trans Mountain for a Just Recovery

Students Demand a Stop to Trans Mountain for a Just Recovery 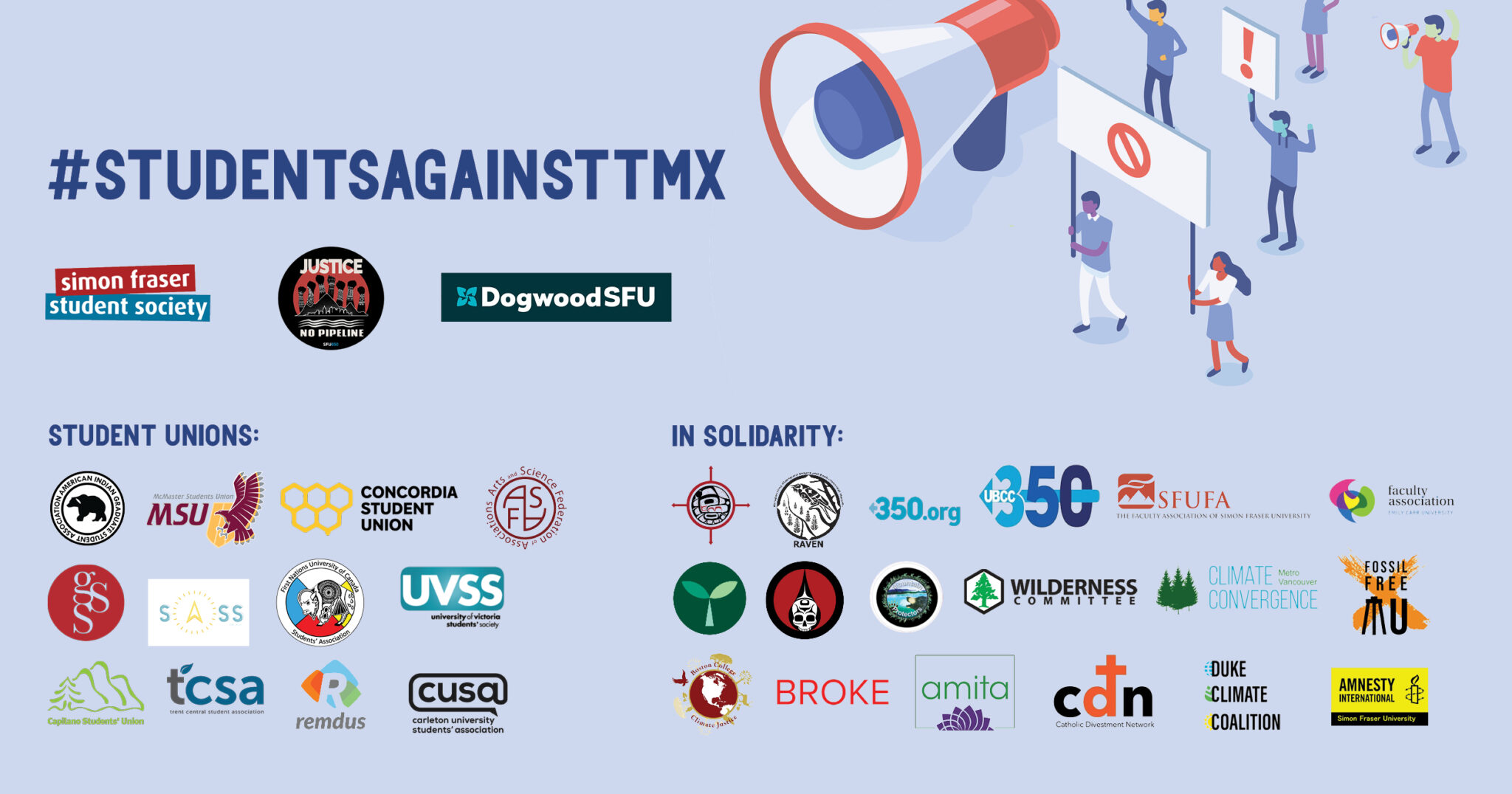 The Trans Mountain Pipeline Expansion (TMX) further burdens the Canadian economy, endangers the environment and communities along the route, and violates Indigenous rights and sovereignty. This is an issue that involves the governments of both present-day Canada and the United States, with much of the oil set to be shipped south of the border. This letter was written by those residing on the unceded territories of the Coast Salish Peoples, including the   xʷməθkʷəy̓əm (Musqueam), Sḵwx̱wú7mesh Úxwumixw (Squamish), səl̓ilwətaɁɬ (Tsleil-Waututh), kʷikʷəƛ̓əm (Kwikwetlem), and q̓icə̓y̓ (Katzie) Nations, but represents students of post-secondary institutions across both Canada and the United States. We students call on Prime Minister Justin Trudeau to implement the principles of a Just Recovery to ensure the security of devastated communities in light of the COVID-19 pandemic. We cannot proceed with the TMX pipeline, as abandoning it is an essential step in pursuing a Just Recovery.

Climate Change and a Just Economy

In light of the global climate crisis, we categorically reject the expansion of the Trans Mountain Pipeline, particularly as Canada is warming at twice the rate of the rest of the world.  Once finished, the expansion will add approximately 400,000 tonnes of greenhouse gasses into the atmosphere per year. Although the projected income from the expansion is intended to be channelled towards a green economy, there is clear cognitive dissonance. Instead of expanding the pipeline, it is imperative to continue investing in clean affordable energy. British Columbia’s green energy sector has attracted billions of dollars in investments, created thousands of jobs, and provides opportunities for First Nations communities. And, with a $12.6 billion CAD price tag, Canadian taxpayers cannot continue to fund a project that will neither benefit the Canadian economy, nor align with present-day Canadian climate change goals. If we truly want to invest in a green economy, we cannot allow the TMX to proceed. We cannot return to business as usual.

A Safe Environment for Wildlife

The expansion project will have negative consequences on the natural environment of the regions it traverses. The 2007 Westridge oil spill and the recent massive spill in Abbotsford are two recent examples of frequent spills, and showcase the disastrous consequences of crude oil, refined and semi-refined product transport. While Trans Mountain has reported that the risk of a marine oil spill within 50 years of TMX expansion is 16-67%, the US Oil Spill Risk Analysis Model and the Vessel Traffic Risk Assessment Methodology estimate this risk to be 58-98%. According to the Rainforest Conservation Foundation, the sound pollution generated by the sevenfold increase in tanker traffic would further endanger marine mammal populations. They also state that Southern Resident killer whales’ chance of functional extinction would increase to 50% within the next 100 years as a result of increased traffic. Residents look forward to being able to interact with nature, and a spill would devastate not only local ecosystems, but these residents as well.

All of these risks and many others are too significant to ignore. It is irresponsible to continue with the expansion while these consequences are well-known. To have an emergency response prepared is not enough; these risks are not acceptable in the first place.

A Healthy and Safe Environment for Students and Local Communities

The Burnaby Mountain Tank Farm facility is located in the city of Burnaby, whose municipal government opposes the expansion. It sits right below the only emergency route off of Burnaby Mountain, in close proximity to Forest Grove Elementary and University Highlands Elementary, and to SFU. According to a study commissioned by the City of Burnaby, with the expansion of the tank farm, the chance of a tank fire increases from 1 in a million to a 1 in 2000 chance per year. In the case of such an event, Gaglardi intersection is the only escape route, meaning that thousands of Burnaby Mountain residents, over 30,000 students and staff at Simon Fraser University, and hundreds of young children at both elementary schools would be trapped on the mountain. This danger is exacerbated by the fact that the nearest emergency response equipment is located 6 hours away. Safety assessment risks conducted by Burnaby Deputy Fire Chief Chris Bowcock, PGL Environmental Consultants’ evaluation risk to SFU, and the Canada Energy Regulator (PLC Fire Safety Solutions) show that there is potential for a catastrophic event, and the expansion puts the surrounding community at risk. This report was only publicly released 3 years after filing and only due to a freedom of information request by the NDP’s Svend Robinson. These potential risks should themselves provide enough reason to suspend the project.

Our recovery will not constitute a Just Recovery unless it takes the valid concerns of Indigenous Peoples into account. In addition to initiating construction on unceded, stolen land despite the opposition of Indigenous Peoples along the route, TMX would limit the necessary cultural and economic activities of these groups. In the words of Rueben George of the Tsleil-Waututh Nation:

… First Nations have won over 250 legal victories over the last 3-4 years against resource extraction projects. Here is our leadership that makes decisions for our people in accordance to our law, which for thousands of years we have been making decisions like this because of our reciprocal relationship of spirit to the lands and the waters protecting what we love, protecting the lineage of where we come from. We will continue to make decisions for our future generations because this present government isn’t capable of doing that so we are making choices for their future generations as well. We come here again, united, to stand up and fight for what we believe in, by any means possible.

Many Indigenous communities are leading their own clean energy projects, such as the Haida Nation, which has built the largest community-owned solar project in BC. Indigenous-led clean energy projects are a viable investment alternative as they allow for “self-determined economic development” of First Nations communities. In the case that investing in such projects is insufficient, TMX still cannot go through because it has not received meaningful and uncoerced consent from all affected First Nations. Although many of the affected First Nations have signed agreements with Trans Mountain, a distinction must be made between Indigenous governance and titleholders. According to Grand Chief Stewart Phillip, who is the current President of the Union of British Columbia Indian Chiefs, “title is territory-wide, it encompasses the entire footprint of the territory and the proper titleholders are the individual members of the First Nation community, not the elected band councils”. Similarly, Chief Judy Wilson of the Neskonlith First Nation states:

We have the Trans Mountain pipeline here in our territory that has no consent from our proper titleholders either. They say they have some agreements signed with bands, but bands can’t own a territory. The federal government created [the elected chief and councils], not our people, and here there has been no transfer of authority.

Furthermore, agreements with First Nations do not necessarily imply consent. And, in the case that some groups do provide their consent, consent from some does not constitute consent from all. BC Human Rights Commissioner Kasari Govender has called for a halt to construction of TMX and other major projects until “all Indigenous peoples impacted by the projects” voice their support. As long as there are First Nations who oppose the project, the expansion constitutes an attack on Indigenous self-determination.

Additionally, ‘mancamps’ are a common occurrence in resource extraction projects. In this phenomenon, the influx of transient workers into the surrounding communities increases the prevalence of physical and sexual violence against Indigenous women. The institution of reactive policies is insufficient, and their implementation lacks consistency across workplaces, often failing to ensure the safety of Indigenous women. The presence of ‘mancamps’ often leads to an increase in the number of missing and murdered Indigenous women, girls, and Two-Spirit people.

In listening to the voices of Indigenous people, the government of present-day Canada must recognize the voices of all titleholders as legitimate, commit to gaining support from all those affected by the expansion, and ensure the safety of Indigenous women, girls, and Two-Spirit people in the surrounding communities. The future of this country will continue to lack justice unless it is predicated on a real commitment to a “‘nation-to-nation’ relationship with Indigenous Peoples”, one that does not include the unjust obstruction of First Nations’ challenges to the expansion.

The COVID-19 pandemic has revealed that our current economic structures are unsustainable and inequitable. To allow for the country to justly recover and rebuild in a way that benefits all inhabitants, we call on the federal government to ensure the following:

As leader of present-day Canada, Justin Trudeau announced plans for the moratorium on crude oil tanker traffic on British Columbia’s North Coast, marched in the September 2019 Climate Strike, and referred to today’s youth as the ‘greatest generation’ of the 21st century. However, these actions are called into question by his purchase of fossil fuel infrastructure, an action which does not align with environmental leadership. Calls for stronger action are not being heeded. As a consequence, the impacts of the country’s lack of preparation for the COVID-19 pandemic are miniscule compared to those of our lack of preparation to address the climate crisis. Is the federal government ready to accept responsibility for putting the safety of thousands of people at risk, including those of young children, for a dirty pipeline that is not only unprofitable, but that counteracts efforts to mitigate climate change? We call on the Canadian federal government to take meaningful towards the creation of a more sustainable and just future by terminating the Trans Mountain Pipeline Expansion.

Concerned Students of what is currently Northern America